It lives inside one-third of the UK population and is a common infection in cats; however, scientists previously knew little about how the Toxoplasma parasite communicated with its host. Now, new research by the University of Glasgow’s Wellcome Centre for Molecular Parasitology, in collaboration with The University of Vermont, has revealed how the parasite uses a key protein to form a communication network and ultimately continue the infection process.

The research, published in eLife (Periz J, Whitelaw J, Harding VC et al. Toxoplasma gondii F-actin forms an extensive filamentous network required for material exchange and parasite maturation. eLife 2017;10.7554/eLife.24119), has identified a key “intracellular network of protein” that allows the parasites to communicate with each other while inside the host. The research has also shown that disrupting this network leads to reduced replication of the parasite and an inability to leave the single host cell, which ultimately halts infection.

Toxoplasma gondii is a parasite that commonly infects cats, but it is also carried by othr warm-blooded animals, including humans. Up to one-third of the UK population is chronically infected with the parasite, although most experience few harmful effects. However, women who become infected during pregnancy can pass the parasite to their unborn child. This can result in serious health problems for the baby, including blindness and brain damage. People who have compromised immunity, such as individuals infected with the human immunodeficiency virus (HIV), are also at risk of serious complications due to the reactivation of dormant parasitic cysts in the brain.

Toxoplasma parasites must actively invade host cells so they can replicate and survive. During an infection, this replication is synchronised, meaning that all parasites in the host cell replicate at the same time. Until now, it was unknown how these parasites coordinated this tightly regulated process. However, through experimental work, the researchers have discovered that the protein actin helps the parasite cells form an extensive network that connects individual Toxoplasma parasites. When this protein is depleted in the parasite, not only does this network collapse, but the parasites also start non-synchronous replication and are trapped inside the host cell.

Professor Markus Meissner from the University of Glasgow, one of the lead authors of this study, said: “This work greatly increases our understanding of the Toxoplasma parasite, and provides an insight into how this potentially dangerous parasitic infection can be disrupted. When we first saw the formation of such an extensive network, we didn’t believe our eyes, and the first thing we discussed was if this is just an artefact, but control experiments demonstrated that it is very real. The major challenge was to convince some of our colleagues who were also looking into the role of actin in these parasites.”

The findings could provide clues to new treatment for other parasitic diseases, including malaria, which cause substantial morbidity and mortality worldwide.

Helping to reduce anaemia in developing regions of South America

Should practising biomedical scientists be involved in research?

On the alert for coronavirus: the role of biomedical science

InterSystems provides the information engines that power some of the world's most important applications. In healthcare, finance, government, and other sectors where lives and livelihoods are at stake, InterSystems has been a strategic technology provider since 1978. InterSystems is a privately held company headquartered in Cambridge, Massachusetts... 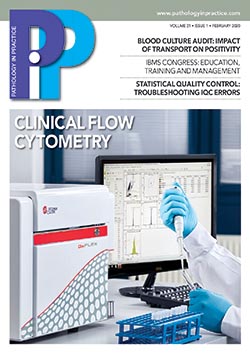 Register now to apply for regular copies of Pathology In Practice and free access to premium content, as well as our regular newsletters.