Respiratory microbiology: BSMT meeting report on a day of inspiration 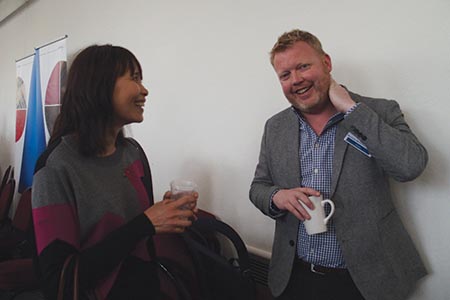 The 34th Annual Scientific Symposium of the British Society for Microbial Technology took place in May at the Royal Air Force Museum, Hendon. On behalf of the BSMT committee, Mark Wilks reports on a day of inspiration and excellence.

The RAF Museum in Hendon was a new venue for the British Society for Microbial Technology (BSMT), whose meetings traditionally have been held at the Public Health England laboratories in nearby Colindale. The theme of the meeting was respiratory microbiology, and full use was made of the increased space available, which permitted a record attendance of 150 delegates and a greatly increased trade exhibition.

Invasive fungal infections and the need for improved diagnostic testing

The morning session was chaired by BSMT President Professor Eric Bolton, who introduced the first speaker, Dr Samir Agrawal (Blizard Institute, Queen Mary University of London and Barts Health NHS Trust, who began with a discussion on invasive fungal disease (IFD) and the need for improved diagnostic testing. Dr Agrawal started by discussing the global burden of fungal disease, which is truly astonishing. There are around one billion superficial infections, around 1.5 million mucosal candidiasis infections, and more than 1.5 million deaths per annum due to fungi, yet they are still a neglected topic by public health authorities, even though most of the deaths are avoidable. Many of the serious fungal infections are a consequence of other health problems, including asthma, AIDS, cancers and organ transplantation. Early and accurate diagnosis permits prompt antifungal therapy, but this is often delayed or unavailable.

Extended range of violet and ultraviolet dyes for flow cytometry

Testing comparable to current standards of care for amyloid diagnosis

R-Biopharm AG was founded in 1988 as a subsidiary of Röhm GmbH in Darmstadt, Germany. In 1991 it was taken over by the present managing director, Dr. Ralf M. Dreher. Since 1996 R-Biopharm’s quality management systems have been certified to the international standards ISO 9001 and in 2003 the company gained ISO 13485 quality management...