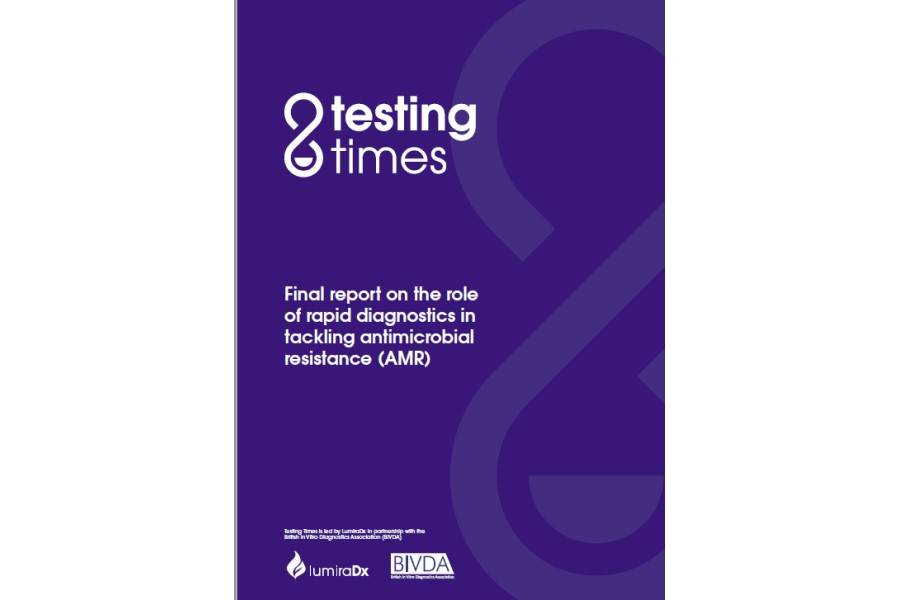 The Testing Times report reflects expert opinion that supporting more widespread use of rapid diagnostic technology should be a central aim of efforts to tackle the next hidden pandemic.

Point-of-care diagnostics company LumiraDx has partnered with the British In Vitro Diagnostics Association (BIVDA), to release the Testing Times report which outlines the role of rapid diagnostics in tackling antimicrobial resistance (AMR) and identifies barriers to their uptake in primary and community care.

For patients presenting with symptoms of respiratory tract infections in primary care, antibiotics are frequently prescribed without a determination of whether the patient has a bacterial infection that can be treated by antibiotics. This is despite the availability of published evidence on the value of rapid testing for C-reactive protein (CRP) that has been shown to significantly reduce the prescribing of antibiotics, according to the report.

“As we move forward from the pressures and challenges placed on the NHS by COVID-19, it’s critical that the UK government is looking to the future and the approaching crisis of AMR,” says Doris-Ann Williams, BIVDA CEO. “Rapid diagnostics have a key role to play in community and primary care settings to lower unnecessary antibiotic prescribing, particularly in respiratory tract infections, and protect the healthcare system in the decades to come.”

To inform the report, healthcare professionals, academics and Government advisors on AMR shared their insights into policy and frontline challenges in a series of interviews led by Professor Jonathan Cooke, visiting Professor at the NIHR London In Vitro Diagnostics Co-operative, Department of Surgery and Cancer, Faculty of Medicine at Imperial College London and Honorary Professor in the Faculty of Biology, Medicine and Health, University of Manchester.

Point-of-care CRP testing reduces antibiotic prescribing by 22-36% for respiratory tract infections (RTI), and 22% for COPD according to published studies. It is one of the most effective tools there is against the leading cause of antimicrobial resistance: unnecessary antibiotic prescribing in primary care.

The Government’s report Tackling antimicrobial resistance 2019 to 2024: the UK's 5-year national action plan, concluded that the UK does not make the best use of available diagnostic technology. BIVDA and LumiraDx are calling on the NHS, Department of Health and Social Care and NICE to unlock the potential of point-of-care CRP testing to prevent antimicrobial resistance.

The key recommendations in the Testing Times report include:

According to Professor Cooke, “The threat of AMR requires urgent attention and action on the part of the UK government. We’ve heard from experts and stakeholders across the board that challenges and barriers remain when looking to implement rapid point of care testing that can significantly reduce unnecessary antibiotic prescribing. Adopting systems that markedly reduce antibiotic consumption is critical for governments that are committed to addressing the rise in AMR.”

Globally, it is estimated that there are at least 700,000 deaths per year as a result of antimicrobial resistant infection and this is expected to rise to 10 million deaths by 2050 if action is not taken.