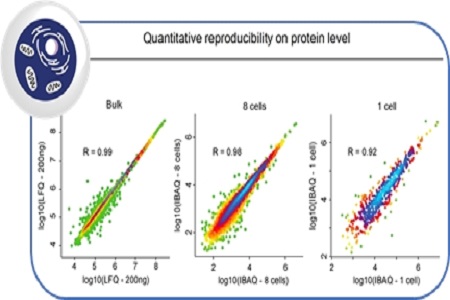 These advances have been demonstrated in a paper on Bioarchive. Key results include the first untargeted and unbiased analysis of true single cells achieving an identification depth of up to 1500 protein groups from single FACS-sorted and individually digested HeLa cells. This sensitivity was achieved by the combined Evosep–timsTOF platform using crucial innovations.

Two new ultralow-flow methods on an otherwise unmodified Evosep One system offer 100 nL/min gradients that lead to approximately 10 times higher sensitivity than gradients at 1 µL/min, confirming theoretical expectations. These new nano-flow methods, using the Whisper flow technology, have the same low overhead as the other established Evosep One methods, and offer a throughput of either 20 or 40 samples per day. They make single-cell analysis robust, as shown by the analysis of 420 single cells that were analysed on the same column. The workflow retrieved known and unexpected proteins, changing abundance upon chemically arresting the cell cycle at discrete points.

Nanoparticle cytokines enable use of macrophages to treat disease

Increasing laboratory efficiency in a remote environment: a webinar

A milestone and investment in COVID-19 testing capacity

Sysmex UK Ltd are one of the UK’s leading diagnostic suppliers of automated haematology, coagulation and urinalysis analysers, reagents and information systems for laboratories and healthcare facilities.
With a reputation for high quality products, unmatched service and unrivalled reliability, Sysmex has become a world leader in...

Verulam Scientific Ltd is an analytical instrument company providing innovative solutions and emerging technologies to the UK pharmaceutical, environmental, life science, food, clinical and biotechnology markets. We provide laboratories with the equipment and services that are crucial to modern analytical services and research.